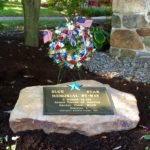 October 7, 2016 in conjunction with the 260th anniversary of the meeting house. The Blue Star Program was started by National Garden Clubs (NGC) in the early 1940s to honor World War II veterans, but it enlarged its mission in 1951 to include all men and women who had served, were serving or would serve in the Armed Forces of the United States. The meeting house is a fitting site for the marker because it served as a hospital for soldiers during the Revolutionary and Civil Wars. The base of the marker is a large field stone that was unearthed on the grounds of the meeting house.