The Uwchlan Friends Burial Ground in back of the 1756 Uwchlan Meeting House was overseen by Downingtown Friends Meeting, until April 2019, when it was deeded to the Uwchlan Conservation Trust. Members of the Uwchlan Garden Club and their families have cleared overgrown vines and trees, straightened tombstones, and located some that are buried below ground and unearthed them. Many markers are worn from years of abuse from our weather and cannot be read. In time, we hope to have a photo collection, but this will take time.

Early Quakers did not believe in the use of tombstones because they believed in equality in life and equality in death. Most graves were unmarked. Later generations bemoaned the fact that they could not locate the final resting places of their relatives. By the mid-19th century, Friends decided that marking graves was acceptable, but tombstones had to be simple with only the name of the deceased, the date of death and their age, perhaps the date of birth. Most of the markers are for people who died after 1850.  A few markers are earlier, but they were likely placed after grave markers were approved.

A listing of all the people who are ”known’ to have been buried in the Quaker Burial Ground in back of the Uwchlan Meeting House is available via email. Please send a request on the Contact Us page. A list is also available in the USGenWeb Archives.

The Trust does not have access to the records of Uwchlan Meeting House Friends. These would be ‘housed’ at Downingtown Friends Meeting, 800 E Lancaster Ave, Downingtown, PA 19335.  Their website is: http://downingtownfriendsmeeting.org/. 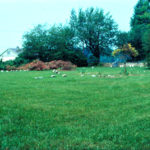 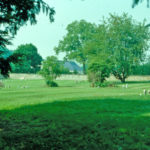