SAVING THE REMNANTS OF AN IRON FORGE

By Wendy Walker, Special to The Inquirer
POSTED: September 12, 1991 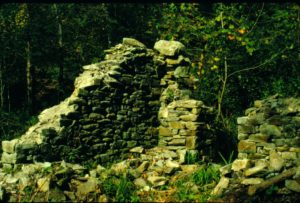 Crumbling stone walls and overgrown piles of red brick are all that remain of the Dowlin Forge in Uwchlan Township. Bicyclists whiz by them on the Struble Trail. Motorists on Dowlin Forge Road pay them no mind, more concerned about the bends in the narrow road. But the forge, which operated from 1785 to 1881, was once a thriving part of Chester County’s iron industry, and the Uwchlan Conservation Trust Inc. is trying to save it from oblivion.

“These walls have crumbled something terrible,” said William Wagoner, who has lived across from the ruins since 1954 and has done extensive research on the site. Vandals have damaged the walls, he said, and some of the creek clay that glued the rocks together has worn away. A falling sycamore destroyed part of a wall. A few walls remain, one a corner with massive cornerstones. There is one doorway and another opening that Wagoner, a member of the conservation trust, thinks was a window. Set into an inside wall is a small niche for a lantern or a candle. Red bricks mark the site of a hearth.

The conservation trust, the group that restored the Uwchlan Meeting House in Lionville, 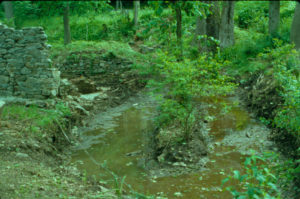 estimates that sprucing up the site will cost $25,000. Members are looking for donors to help offset those costs. The group already has cleared the brush, weeds and trees that almost hid the walls, and has made preliminary excavations to determine the size of the forge. Its next tasks are to shore up the walls, rebuild some walls and the hearth, and restore the raceway that carried water from the east branch of the Brandywine Creek to the water wheel. The group does not plan to rebuild the forge entirely.

A successful iron forge needed iron ore, limestone to use in the purification process, wood to make charcoal and a water source to provide power. The Dowlin Forge site had all four. The creek was dammed to provide power, and the large logs that formed the dam’s base are still visible in the creek. Impure iron was hauled to Dowlin Forge from local furnaces. The metal was heated with lime flux – called a bloom – and reworked into bars of iron with two huge hammers, driven by a water wheel. The pounding beat out impurities. The resulting iron was then sold to rolling mills.

At one point the forge was leased to Lukens Steel. Wagoner said the iron was prepared at the fo

rge, then packed in sand to keep warm and hauled on carts in eight-mule teams to Coatesville. He said some of the metal plate on the USS Monitor, a famous Civil War ironclad battleship, may have been made from iron prepared at the forge. Wagoner has found chunks of pig iron, another name for the crude iron, in the ruins and said the slag, or waste product of the forge, was abundant. “There are layers of it all over,” he said. “Anybody who comes around with a metal detector, well, it would blow their ears out!”

A settlement of houses, workshops and a general store grew up around the forge. Wagoner said that when he was trying to establish his lawn, the grass refused to grow over the site of an old charcoal shed. Old ledgers show that the store sold whiskey for 25 cents a gallon and shoes for $1.75 a pair. 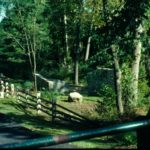 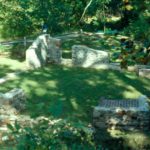 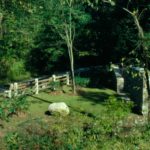 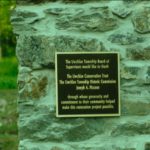 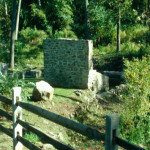