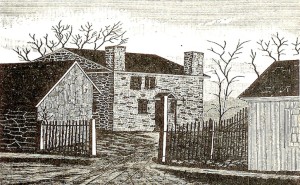 William Penn established his “Holy Experiment,” in 1681, by petitioning England’s King Charles II for land in North America in settlement for a debt owed his father. Penn was a Quaker and one of his intentions was to provide a safe haven in the New World for Quakers, who were punished by many European nations for their beliefs. His legacy of religious freedom for all in his colony of Pennsylvania, or “Penn’s Woods,” is a keystone in United States democracy today.
The first settlers to be attracted by Penn’s promises of fine geography and climate, low quit rents, and the abundance of land were the Welsh, some of whom were Quakers. They arrived in Uwchlan by 1700. The Welsh spelling was “Youchland,” meaning “Upland.” At first worshipers met in private homes. In 1716, John Cadwalader and his wife Sarah donated land at the junction of present-day Route 113 and old Route 100, the King’s Road, located on the west side of the Meeting House, for use as a burial ground, and, eventually, for a new Quaker Meeting House. Several years later, a log cabin was built to serve the members of Uwchlan, Nantmeal, and Pikeland Meetings. This was replaced with the field stone Meeting House in 1756.

Quaker Ideals in Action
During the Revolutionary War, the hospital at nearby Yellow Springs was overwhelmed 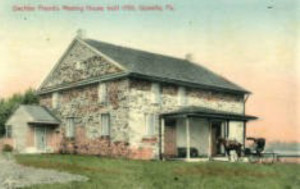 with patients. Dr. Bono Otto was forced to commandeer the Meeting House for use as a hospital. A number of soldiers who died here are interred in the burial ground behind the Meeting House. However, the location of individual graves is uncertain. The Quakers, who firmly believed in religious freedom, the abolition of slavery, and education for all, put their faith into action by supporting the Underground Railroad, and establishing a school for children. Their beliefs also included opposition to war. During the Civil War, the Quakers readily allowed the Meeting House to be used as a hospital since they were steadfast in their opposition to slavery.

Many other religious affiliations came into Uwchlan Township and the Friends began to move away or attend other churches. In 1900, members of the Uwchlan Meeting joined the Downingtown Meeting, but maintained ownership of the Uwchlan Meeting House and burial ground. Since then, the building has had several uses and owners. It was used as a library, an elementary school and a high school until 1960. The Uwchlan Grange bought the Meeting House and sold it to The Woman’s Community Club of Uwchlan (WCCU) in 1963. In 1973, the Meeting House was placed on the National Register of Historic Places. The WCCU was able to begin restoration of the building and install its first central heating system. The cost of continued maintenance exceeded their financial abilities and the Club sold the Meeting House to the Uwchlan Conservation Trust in 1976. The Trust tackled the exterior and interior areas, including a modern kitchen. Members of the Club continue to provide substantial funding and management for the Meeting House. In 2020, the WCCU used some of its assets for purchasing a new gas boiler and relining the chimney, having the large meeting rooms painted , having the divider and stage refinished and replacing the rugs.

The 21st Century
In 2016, the Trust celebrated the 260th anniversary of the Meeting Ho 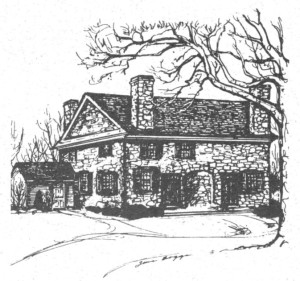 use. Today, the Meeting House serves the community in many ways. In addition to organizations holding regular meetings, rentals are available at a nominal cost for parties, meetings, weddings, memorial services, and Eagle Scout Court of Honor Ceremonies. Annual Christmas Fairs and Plant Sales are held the first Saturday of December and May, respectively, and are important sources of funds for the building and its heritage. The Trust plans for the Uwchlan Meeting House to continue to serve the community long into the future.